1. My paternal family (grandparents, my father & his siblings). Probably photographed in Poland in 1918 just before they left for America. The cardiac system represents the beating heart of my & all families. In a dysfunctional family (sigh) the heartbeat can be quite irregular.

2. We are an ancient, ancient, religion that, no matter how we develop, can not escape being embedded in the stones of Jerusalem.

3. My family comes from the Russian Pale of Settlement &/or Poland: The populations of Central Europe remained in their same ancestral location but at any particular time a different country or empire might seize the territory. World War I was the last straw for the family. It was time to leave before the next invading army came through.

4. The Holocaust. I am looking at a family tree. Many of the extended family branches end in Auschwitz.

5. My father’s Polish passport & The Amsterdam, the ship on which he immigrated (probably in steerage). He told me that, as a Jew, he had to stand well back from the desk of the official from which he would obtain the document so as to not accidentally touch him. Then he could step forward & place the fee on the desk. Step back while the official took it & then go through the procedure again to pick up the actual passport. The family didn’t know that the holocaust was just over the horizon but they knew that things couldn’t possibly be worse in America… 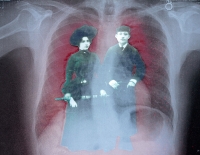 6. For whatever the reasons, there was a lot of marriage between closely related persons among Ashkenazi Jews in Eastern Europe. This increased the chances for a number of genetically passed diseases including Cystic Fibrosis, Gaucher’s Disease & Tay-Sachs Disease. (Like European royalty but without the power & wealth.) My maternal grandparents were quite in love. They were also first cousins. Various auto-immune diseases run through my family. We deal with them as best we can…

7. World War II. Men of my father’s generation served in the American armed forces. My Uncle Sammy (in the picture frame) remained in the Air Force until he retired as a Sargent.
My Uncle Maurice was an educated man who came from Panama to find a Jewish woman to marry & married Ruth (on the left). He spoke many languages including German & was dropped behind enemy lines by the Army. After the war he started an import-export business concentrating on South America that seemed to do exceedingly well no matter what the economy. When he died, we found out that he had become a CIA agent & the business was partially a cover…
After the war, my Aunt Dotty (2nd from left) married Harry who us kids considered stark raving mad. (He’s described precisely in Bob Dylan’s I Pity the Poor Immigrant.) It was explained to me thus: “Harry & his brother were trapped by the German invasion of Poland. They fled east, just ahead of the German lines for many months, living on grass or whatever, until they finally reached the Russian lines. Made him crazy.”

8. For better or worse, we live in extraordinary historical times & we only hope that we can pedal through them undisturbed.
This is a visual essay. I am trying to disentangle the aesthetic from the moral &, the more I try, the more I see it’s impossibility.

9. This is the most personal of all of these images. From Blake’s image of God emanates the light from which our Jewish being is derived. At the bottom, I, as an infant look alarmed at what is raining down upon me, as well I might. My mother, very religious & trying to follow the old world precepts, sent me at a young age (6) to a very orthodox, very old world, yeshiva. The left side represents the rote memorization demanded of me. The right represents another, intellectual Jewish tradition that I embraced instead as I got older. We see those architects of the 20th century, Marx & Freud. (I could have added Einstein.)

10a, 10b. I have always been attracted to Zen Buddhism with it’s emphasis on living in the immediate present or, as Talmud says, “If not now, when?” 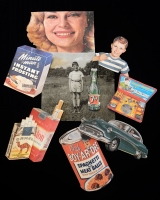 11. America in the 1950’s. My wife, raised as a midwest Unitarian (though long since fled to become a coastal beatnik intellectual) swam through these commodities like a fish through water. As a child, it was all inexplicable to me…

12. The late 60’s on. Integrating myself into America meant joining a cultural & political ferment that shows no sign of abating…

13. My parents on our annual two-week vacation at an upstate bungalow colony, dressed to go out in the evening. During the day my brother & I played in the woods & picked wild blueberries to have later with sour cream. Heaven.

14. My father drove a cab in New York for 41 years. He left the house at 3 p.m. & returned at 3 a.m. Even though my parents never understood my wanting to attend college, their sacrifices prepared the way. After he retired, they moved upstate to Monticello & I visited. They had a car & I was asked to drive. My father did NOT approve of my driving abilities. He yelled “You don’t have to stop at stop signs!”.

16. Self-portrait, from the old country.
This essay sits at the space where family & history intersect. Immigrants, more than anyone else, except for those living in a war zone, are familiar with that space. Poverty & Anti-Semitism (& the courage to respond to an opening) led my family to join the early 20th century wave of immigration from the Russian Pale of Settlement to America. They were neither intellectuals nor great businessmen – other than survival, the best that generation could do was the small produce stand that my maternal grandfather had & which they were quite proud of. But let’s not get maudlin. They were overjoyed to be here, where no one harassed them for being Jewish & all it took to rise above poverty was a job. So they got on with the project (as all immigrant groups do) of weaving themselves into the fabric of America.

My generation went to school & mostly went into business but it included an artist. That’s me, trying to come to terms with my personal, family & cultural history.

All images are multiple exposures made in the camera. Some, in addition, contain painting.